Fix or pimp your clothes an support our project for more episodes!

PASS PER PASS a short films series about freeriding in the Lower Engadin, in the Swiss Alps.

“In this episode we’re exploring a special place in the Lower Engadine mountains. We’d like to share this unique experience with you. Spend the evenings at the camp fire, hike through a forest of age-old Swiss stone pines, scale an untouched culuoir – always on the lookout for pow.

With the Rumantsch off voice and music, we add a spark of the story and language from the place we call home.”

PASS PER PASS a short films series about freeriding in the Lower Engadin, in the Swiss Alps.

“Step by step we got more inspired by the lines that we found. Many of them in the backyard of our parents house where we grew up. The full moon invited us to stay out late and witness beautiful sceneries. With the Rumantsch off voice and music, we add a spark of the story and language from the place we call home.”

Elena has been on the West team for six years now! She is not only a talented snowboarder but also a creative painter! We are excited to launch the FACE TO FACE “capsule” including one unique snowboard, 10 prints printed by @sergelowrider and 15 long sleeve shirts produced on environmentally friendly garments.

All benefits of the “face to face” project will be donated to the NGO “SKATEISTAN”, which empowers children through skateboarding and education in Afghanistan, Cambodia and South Africa. Learn more about “skateistan” HERE

Being part of this great book dedicated to women in snowboarding means a lot to me. Definitely a book you don‘t want to miss on your coffee table! 288 pages with inspiring stories and the best photos by Jérome Tanon.

As a kid I used to sit in front of my window drawing pictures of the Engadin mountains. The same mountains where I later found my love for snowboarding. Drawing and Snowboarding were the two hobbies that meant the most to me when I grew up. However, for a long time the two passions remained separate worlds. Often in life I was told what is right and what is wrong, how I should be and act. That I should stop snowboarding and do more art, or that I was behaving like a „boy“.
I’m lucky that by rebelling against this pressure I found places where the pursuit of unique style is valued and even promoted. Simultaneously I had the chance to meet numerous brave and interesting people who inspired me become what felt right. After years pursuing the two passions I start to see more and more similarities between them. For both, it is about the creation of movement, resulting in forms which give each human a unique style, independent of gender and background.

Studies of THE LINE

A3 prints on natural paper I & II 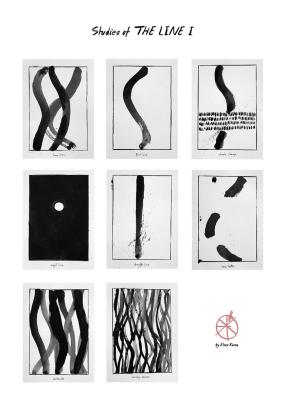 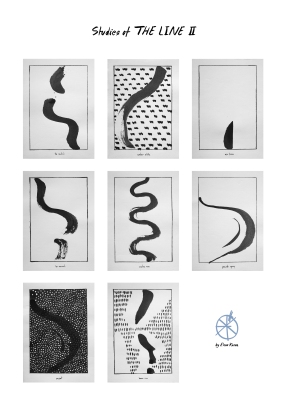 Originals A5 painted with charcoal, black paint water and snow

Studies of THE LINE I 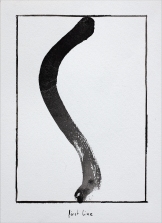 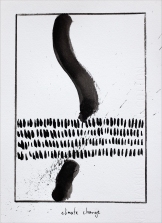 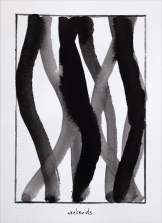 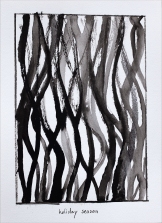 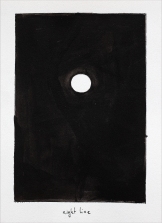 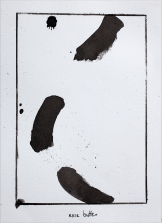 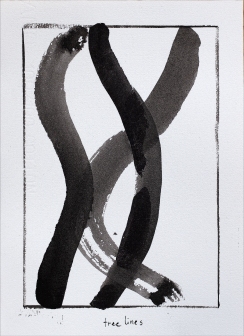 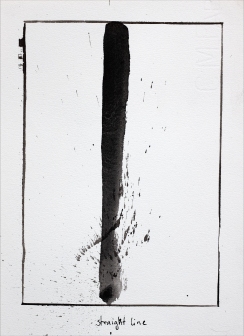 Studies of THE LINE II 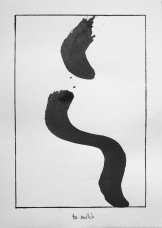 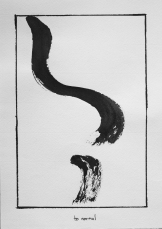 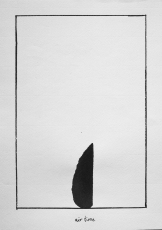 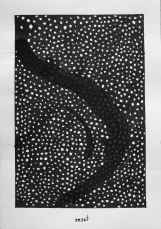 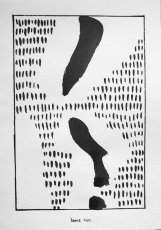 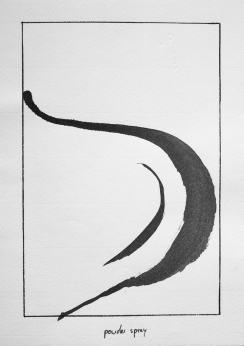 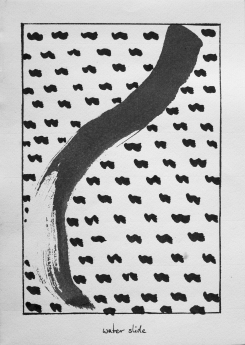 Last season I was mainly snowboarding at home in Switzerland. It was one oft he best winters I had. Enjoy!

In this short Film “IL DAT ALB” – “the white cube” Elena Könz shows us a creative approach to two of her passions – snowboarding and art. In collaboration with the skiresort Motta Naluns/Scuol she had the opportunity to create a park line – the “Dragon Line”.

Together with the artist Rips1 (Linus von Moos) Elena painted the obstacles for the line with shapes of a dragon (a recurrent animal form in Elena’s artwork). Elena makes a statement in using only obstacles she upcycled from the skiresorts old stock with the help from the shapers of the snowpark.

Elena Könz – „To ride on my own art in the white cube of nature is a dream come true.“

Audio and Sounddesign by Brauereisound GmbH 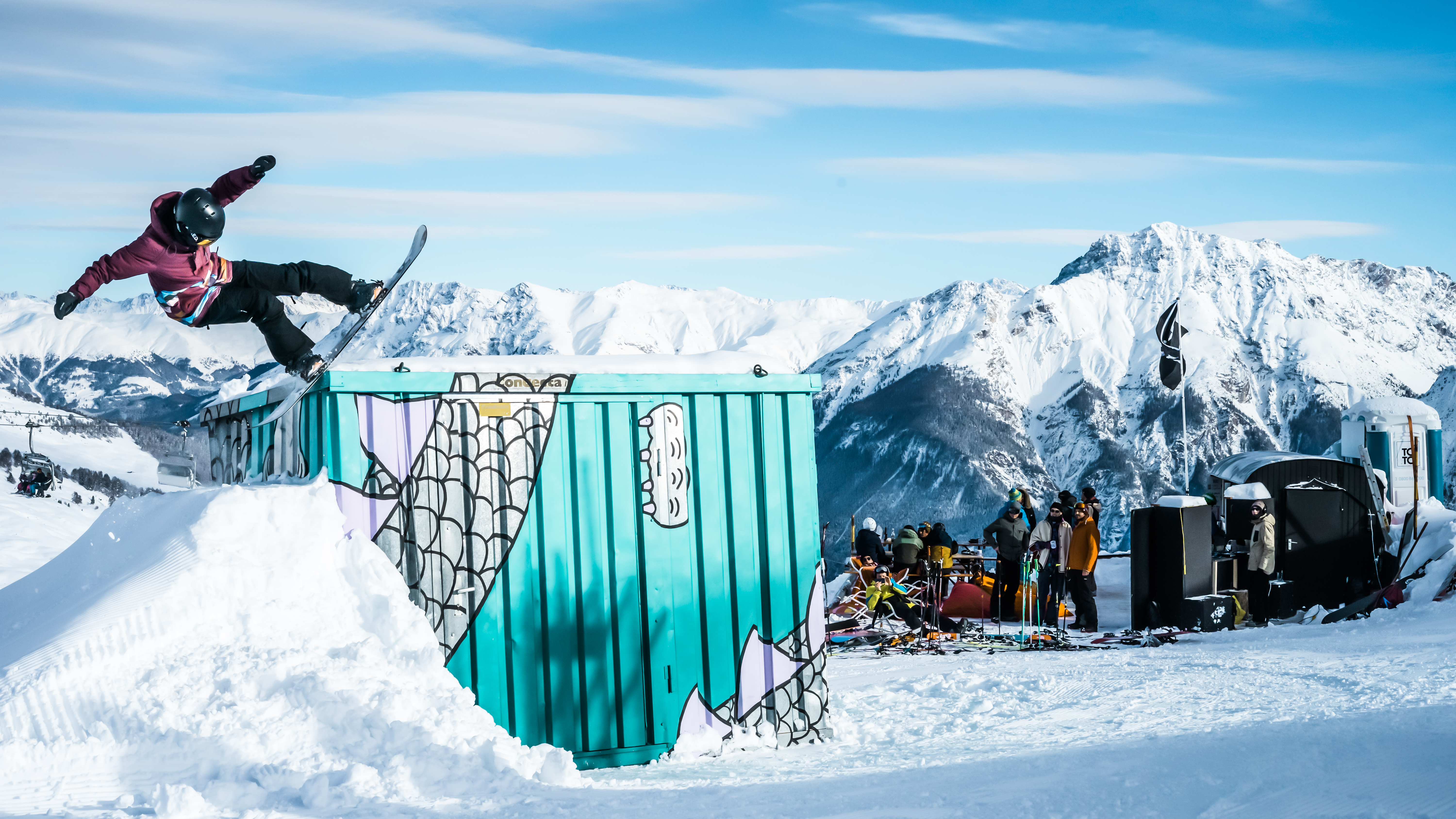 Leave a comment
Topical, Trips around the world, Videos

Spirits Of The Cedars

Being one of the oldest countries in the world, Lebanon is despite her small-scaled dimensions a remarkable intriguing country that needs to be visited more than once. Without prejudice and recognition alone. Why? You don’t know, until you go. 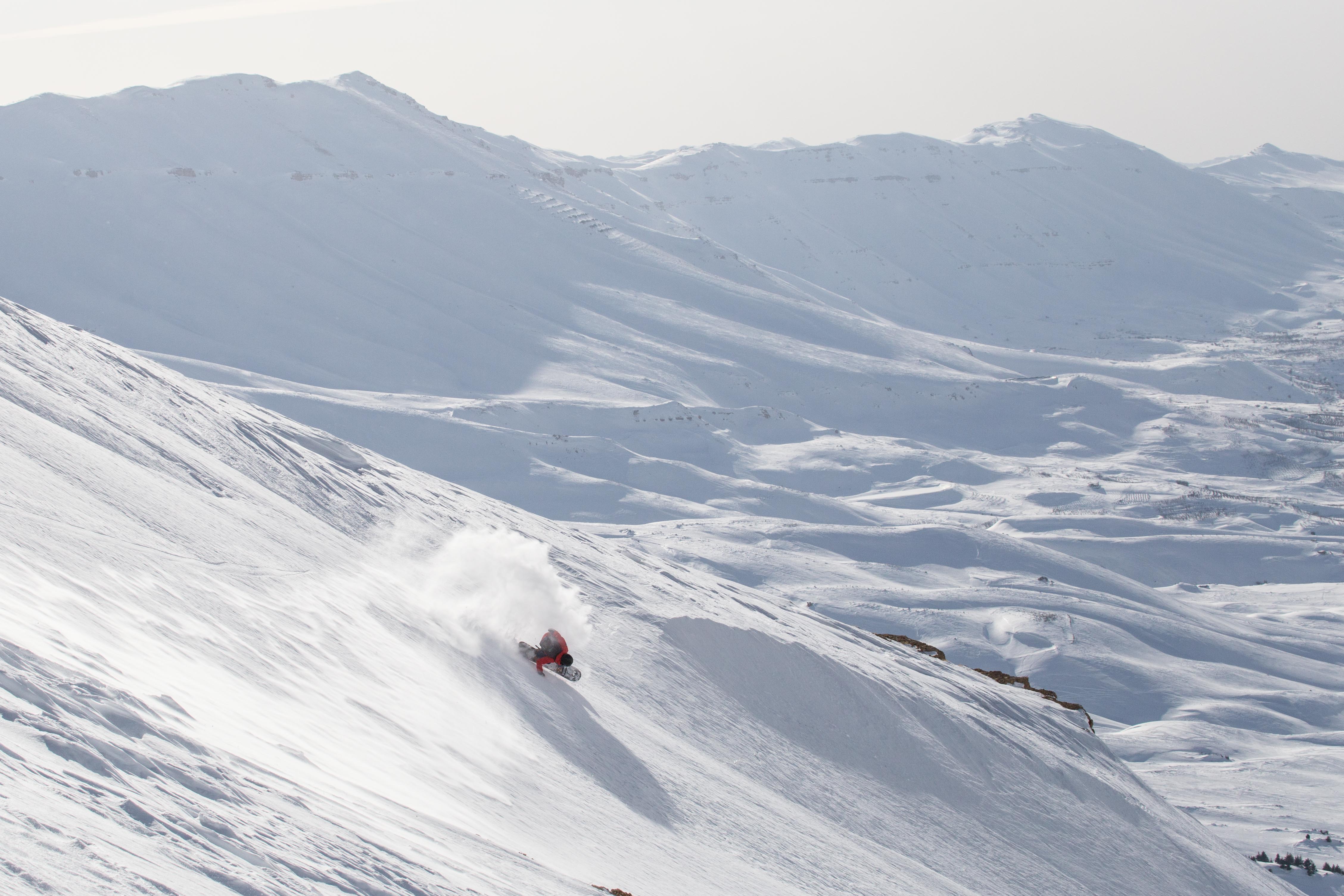 Three women on boards – Mirte van Dijk (NL), Elena Koenz (CH) and Valerie Schlieper (D) – visited the most historical places of the country: from mountaintop to seaside. They met with local athletes and outdoor enthusiasts who told them about history, culture and politics. 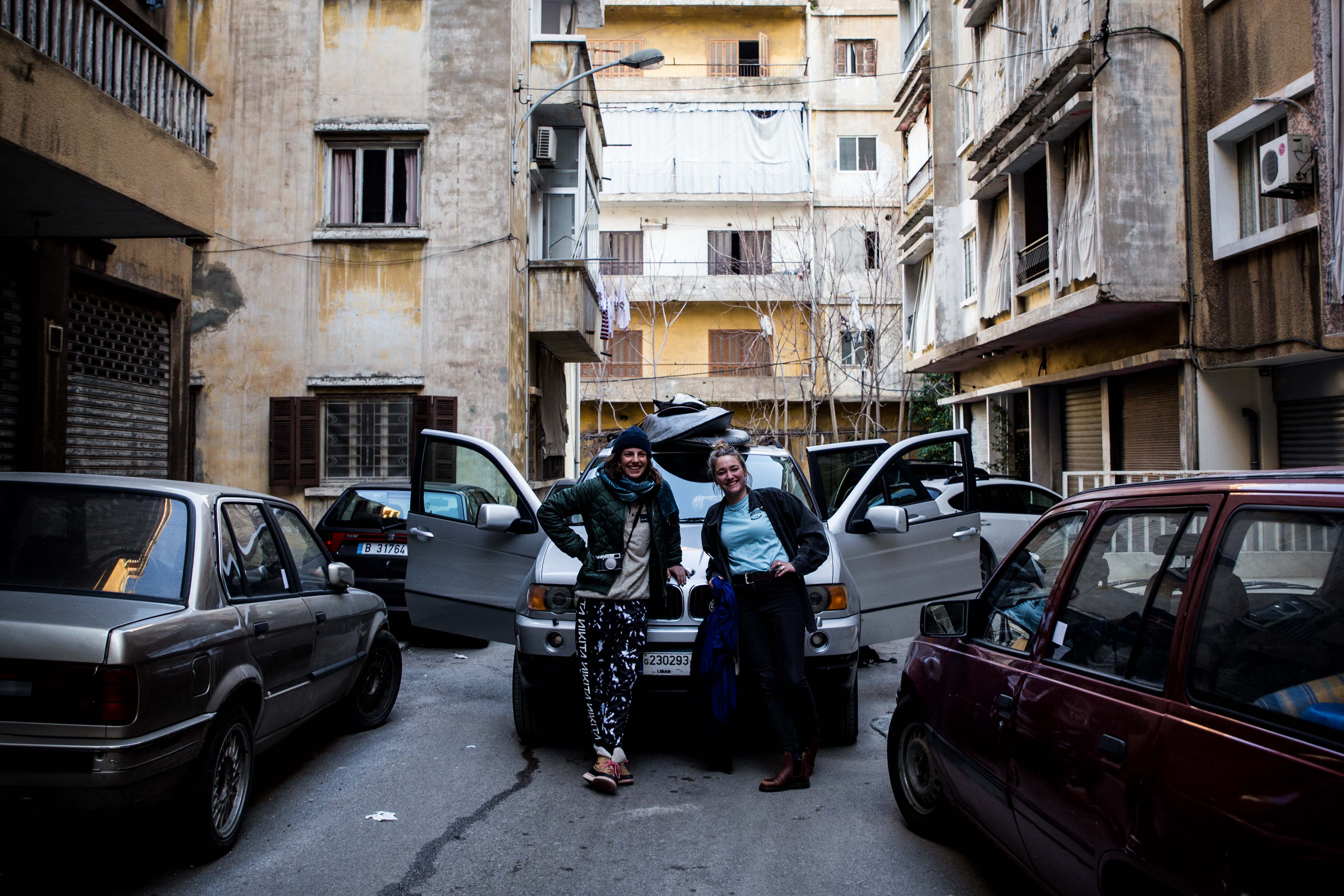 The Cedars ski resort lies at the end of the holy valley: the Qadisha Valley. In this area you will find the oldest Cedar forest of the world, the Cedars of God. You can do some snowboarding, mountainbiking and surfing all in one day. The people around here have a story of their own and one of these stories lies here in the Cedars of God. 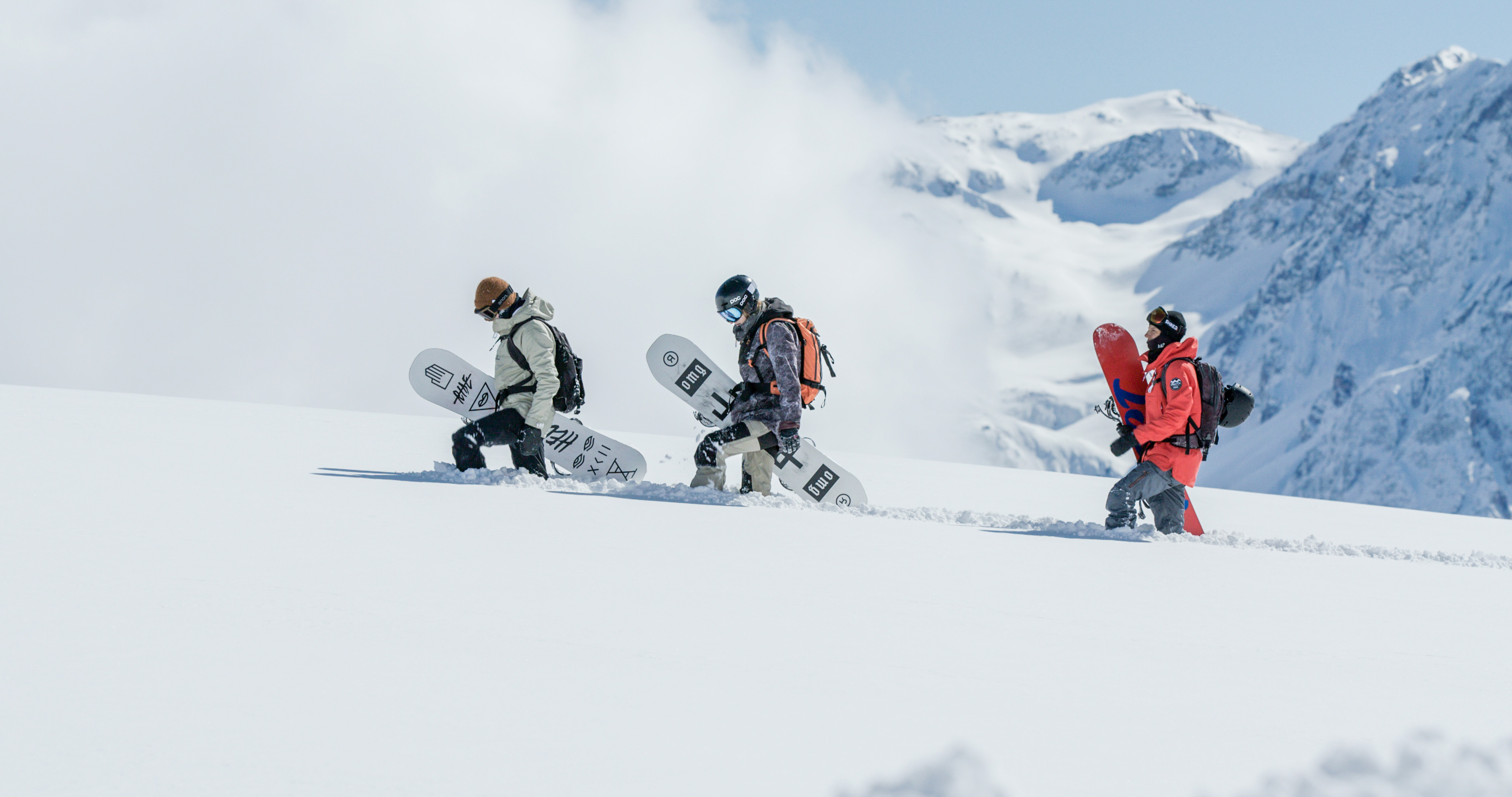 This year was awesome for riding powder in Switzerland. The best thing about it was that I didn’t have to fly anywhere to find good pow. I could basically stay at home and let the nature do its work. As I stopped riding competitions after the Olympics last winter, I could enjoy the pow to the fullest without having thoughts on missing out trainings or competitions.

We had some awesome days in my hometown over Christmas where we could ride powder everyday in my home ski resort Scuol or touring near by.

I grew up in Vnà, a small village in the mountains of Switzerland. The village has 60 habitants, so I know everyone by name. Some oft he houses are empty and the village was our playground when we where kids.

This is when I had first thoughts about doing a film project in the village where I grew up. When PeakFrames asked me if I would like to do a film project with them, I had a plan. 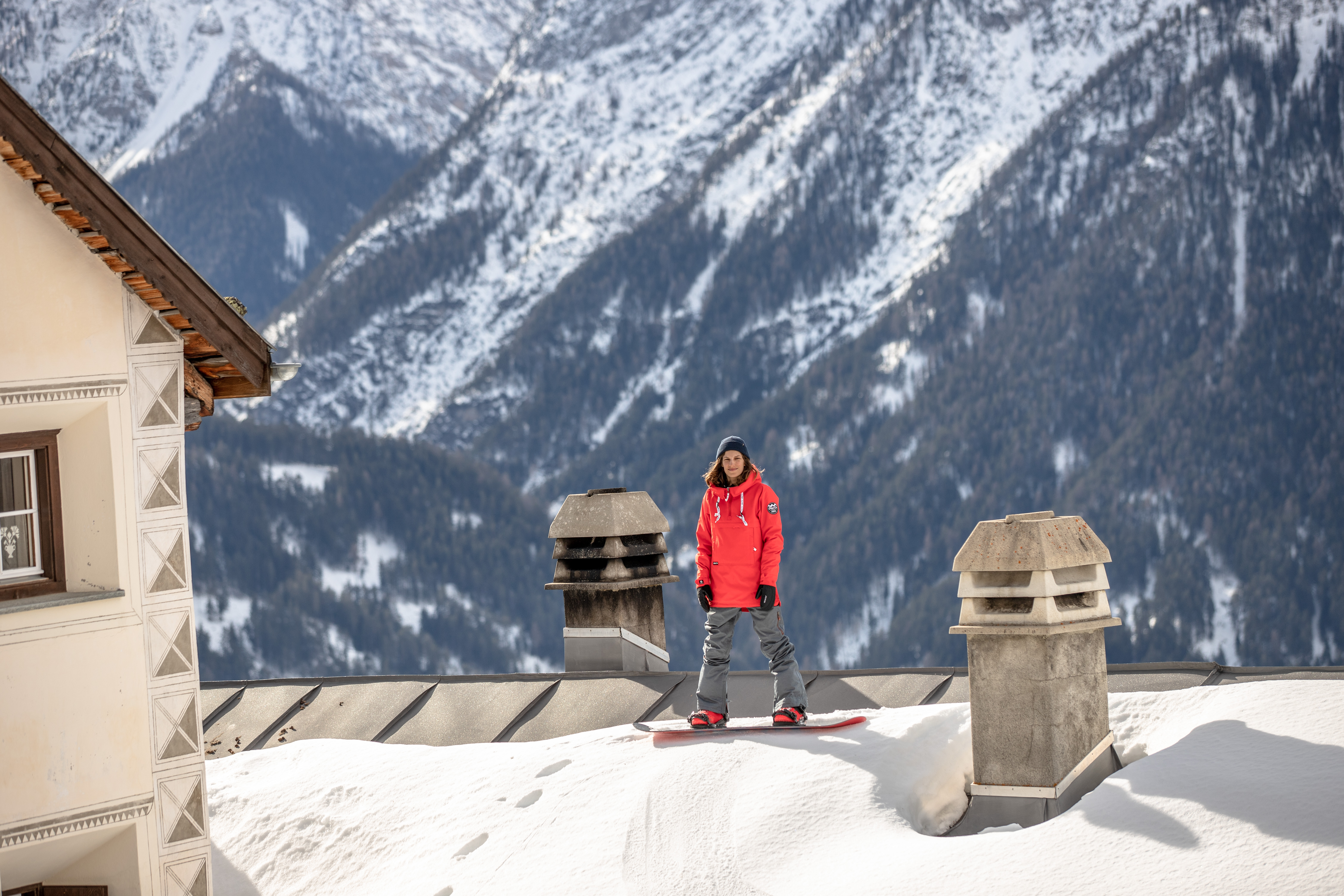 When we could start to film unfortunately most snow in the village had already melted. As we still wanted to film something there, we had the idea to drop from a roof because there was still some snow up there. After the post man drove two times over the landing with his car and we prepared it again, our friendly neighbour let me climb up the roof and get the shot.

The first two days filming in my hometown where pretty intense. We did two other spots near my hometown and one turned out to be a lot of fun as I could ride it first as a quarter and then as a jump where I did a backside air. 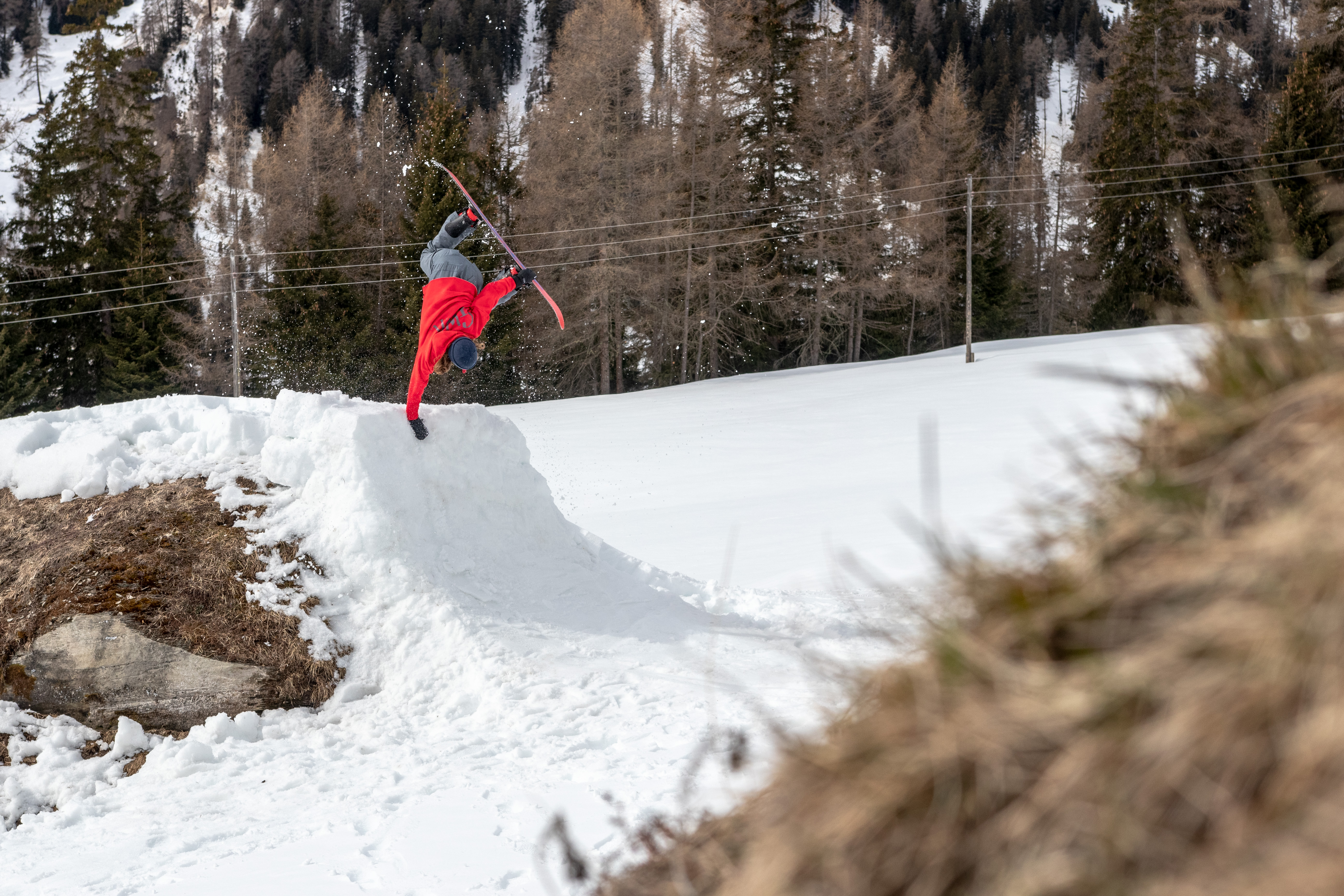 A week later we got lucky as it snowed again. My friends Isabel Derungs and Irene Schweizer joined me for one of the most fun powder days in my home ski resort Scuol. We did some hikes to find untracked snow where we could film some sprays, turns and butters.

It was a really good experience and so much fun to film with PeakFrames, Isabel Derungs and Irene Schweizer. A huge thanks to everyone involved and to everyone supporting and believing in us.